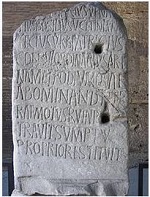 Latin (latīnum, [laˈtiːnʊ̃] or lingua latīna, [ˈlɪŋɡʷa laˈtiːna]) is a Italic branch of the Indo-European languages. Latin was originally spoken in the area around Rome, known as Latium. Through the power of the Roman Republic, it became the dominant language in Italy, and subsequently throughout the western Roman Empire. Latin has contributed many words to the English language. In particular, Latin (and Ancient Greek) roots are used in English descriptions of theology, the sciences, medicine, and law.

By the late Roman Republic (75 BC), Old Latin had been standardised into Classical Latin. Vulgar Latin was the colloquial form spoken at that time and attested in inscriptions and the works of comic playwrights like Plautus and Terence and author Petronius. Late Latin is the written language from the 3rd century; its colloquial form Vulgar Latin developed in the 6th to 9th centuries into the Romance languages, such as Italian, Sardinian, Venetian, Neapolitan, Sicilian, Piedmontese, Lombard, French, Franco-Provençal, Occitan, Corsican, Ladin, Friulan, Romansh, Catalan/Valencian, Aragonese, Spanish, Asturian, Galician, and Portuguese. Medieval Latin was used as a literary language from the 9th century to the Renaissance which used Renaissance Latin. Later, Early Modern Latin and New Latin evolved. Latin was the language of international communication, scholarship and science until well into the 18th century, when vernaculars (including the Romance languages) supplanted it. Ecclesiastical Latin remains the official language of the Holy See and the Roman Rite of the Catholic Church.

A number of historical phases of the language have been recognized, each distinguished by subtle differences in vocabulary, usage, spelling, morphology, and syntax. There are no hard and fast rules of classification; different scholars emphasize different features. As a result, the list has variants, as well as alternative names. In addition to the historical phases, Ecclesiastical Latin refers to the styles used by the writers of the Roman Catholic Church from Late Antiquity onward, as well as by Protestant scholars.

After the Western Roman Empire fell in 476 and Germanic kingdoms took its place, the Germanic people adopted Latin as a language more suitable for legal and other, more formal uses.