Which countries can apply for Angola eVisa?

Nationals of 62 countries listed below are eligible to apply for an Angola Tourist eVisa on Arrival.

After the pre-visa is granted, they can then obtain a visa on arrival at the following designated ports of entry.

Passengers with a confirmed onward ticket for a flight to a third country within 24 hours. They must stay in the international transit area of the airport and have the documents required for their next destination. 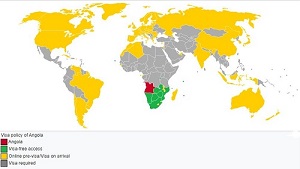 A tourist visa must be used within 60 days from the issue date and is valid for 30 days, a period that can be extended once for an additional period of 30 days. Your passport should be valid for a minimum period of 6 months from the date of entry into Angola.


Citizens from 62 countries are eligible for Angola Visa :

Since 30 March 2018, Angola began issuing tourist visas valid for 30 days in a simplified procedure to visitors from 59 countries. Visitors must first apply for a pre-visa online with the Migration and Foreigners Service. After the pre-visa is granted, they can then obtain a visa on arrival at the following designated ports of entry. Visa fee is US$120. In order to obtain a pre-visa, applicants must submit proof of accommodation and subsistence means, a return ticket and the International Certificate of Vaccination.

You’ll be fined 15,000 Kwanzas (Angolan currency) per day if you overstay your visa. You won’t be allowed to leave the country until your fine has been paid. Legal action will be taken against you if you don’t pay your fine. This may include being detained, deported or not being allowed to re-enter Angola.

After the pre-visa is granted, travellers can then obtain a visa on arrival at the following designated ports of entry.