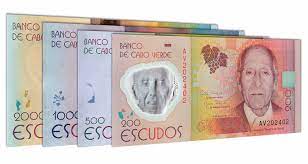 The escudo became the currency of Cape Verde in 1914. It replaced the Cape Verdean real at a rate of 1000 réis = 1 escudo. Until 1930, Cape Verde used Portuguese coins, although banknotes were issued by the Banco Nacional Ultramarino specifically for Cape Verde beginning in 1865.

After independence, coins were issued in 1977 in denominations of 20 and 50 centavos, 1, 2½, 10, 20 and 50 escudos. The centavo coins were aluminium, the 1 and 2½ escudos were nickel-bronze and the higher denominations were cupro-nickel. As inflation persisted the centavo coins progressively disappeared from circulation and by the time the coinage was revamped the 1 escudo coin was the smallest in circulation.

The present coinage was introduced in 1994. The smallest was a brass-plated-steel 1 escudo, though the 1 escudo doesn't circulate well and vendors tend to round to the nearest five in practice. This coin comes in only one style, featuring a sea turtle, while the other denominations came with three topical styles. These are the copper-plated-steel 5 escudos, nickel-plated-steel 10, 20 and 50 escudos, and bimetallic, decagonal 100 escudos. The three congruent design series had one featuring native animals (Birds and reptiles), the second was of historical ships with their names included, and the last was of native plants and ferns. Heptagonal 200 escudo coins have been issued in 1995 to commemorate the 50th anniversary of FAO and 20 years of independence. Another 200 escudo coin, this time round was issued in 2005 to commemorate the 30th anniversary of independence. Circulation of the 200 escudo coin is not quite as widespread as the other denominations but they are still commonly distributed and accepted alongside the 200 escudo note.

These rates are obtained from xe.com and may contradict with pegged rate mentioned above